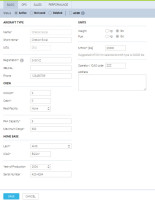 To add a new aircraft, go to Settings > Fleet and click the link „New aircraft”. If you type first letter or number of the aircraft type you want to add in the field Name, Leon will show a suggestion in the drop-down list. It is important that you go through all the tabs and fill in the aircraft data as this section is a source of information for many functions in the system.

Please make sure that the registration number is correct and entered in the same way it is in other systems that you may use alongside Leon, as PPS or Avinode (ie. XX-YYY, not XXYYY). Also, if you ever decide to change it, please bear in mind the past flights will be affected so it such case it is better to deactivate the aircraft and add a new one.

When setting up an aircraft, you can give it one of the three statuses:

This is a crucial aspect of the monthly billing, so make sure the status is adequate at all times.

Active – default status indicating the aircraft is in operation. If this status is set at any point during a calendar month, the aircraft is a subject to a monthly charge according to our PRICING SCHEME.

Not Used – If the aircraft is temporarily out of operation or soon will be joining the fleet, this status allows to exclude aircraft from billing (given it is set as ‘Not Used’ for a full calendar month) while maintaining the view of this aircraft throughout the system (in the filters – for historical data).

Deleted – this status deactivates the aircraft and hides it from the view throughout the system. It should be used when the aircraft leaves the fleet.

It is not possible to permanently remove an aircraft from the system for historical data purposes. 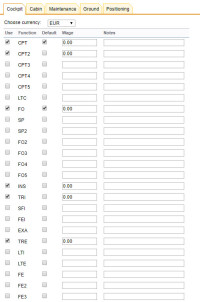 The aircraft positions are set by admins in Settings > Aircraft Crew Positions where you can find a selection of crew positions available in the system. These are set per aircraft type, not a particular registration number, so if you add another aircraft of the same type, the positions will be copied over. These need to be defined in order to be later available to be assigned to the crew members.

A number of positions are pre-defined by the system, but you can adjust those to your needs. There are five position groups:

Each of the groups contains three columns:

Example: If a crew member is assigned the rating FM (Flight Mechanic in Maintenance group) and a PSN rating (which allows to place a crew member on a flight in order to be repositioned) in the Positioning group and then is added to a flight on position PSN, they will have their duty calculated, but no FDP. Cockpit and Cabin groups are included in both FDP and Duty calculations.

Click below for a step by step video tutorial on on how to add and edit aircraft data in Leon: