Once aircraft are added to Leon you need to add appropriate functions (crew positions) to it. It is very important part of the system because it will allow you to add ratings, assign crew to flights and create duty on aircraft.

In this section select an aircraft type in the filter and mark needed checkboxes.

You can choose the currency for wages.

You can see 5 columns in this section:

If the Currency and Wages are set, Leon will be able to calculate wages based on CMT. In order to do it, you need to fill in CMT in JL. The result of this calculation will show in Block Time by Function report.

You can assign function to each part of you business (Flying crew, Maintenance, Ground) by going to different tabs in the top of the screen.

Positioning tab will allow you to assign functions that do not calculate FDP but duty only (PSN) or neither FDP nor Duty (PAD). When PSN will reposition a crew member from one place to another in Leon, PAD will not do it.

DEFAULT CREW POSITIONS per a TAIL 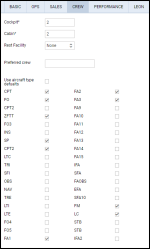 It is possible to set up default crew positions not only for aircraft type but also for particular aircraft tail.

This can be set up in the aircraft edition panel, under the tab 'CREW'.

In this tab, a list of positions specified in the section 'Aircraft Crew Positions' is visible.

This list can get further narrowed down for a particular aircraft registration. This is especially useful for operators with many same-type aircraft in their fleet but different requirements as to the necessary crew positions on each tail.

To apply the default positions, 'Use aircraft type defaults' checkbox needs to be unmarked. If the checkbox is marked, crew positions as specified in Aircraft Crew Positions will apply.