Recently we have changed a lot of user interface in Leon, but the good news is that almost all major changes which affect daily usage of the application have been implemented. We are aware that some of you may have negative impression that we have done all of this without announcing much in advance, which caused a lot of troubles on your side. We would like to apologise for all of the inconvenience produced by these changes.

In this article we would like to let you know why we did all of this and why we strongly believe it will improve Leon's user experience in the near future.

These changes were necessary to ensure compatibility with the new Leon, which is coming in big steps now and to allow much improvement in Sales module that is going to be delivered shortly.

After analysing how Leon is used, we decided to make it in “one shot” - in the shortest possible period, not extending it over our standard release cycle. We announced these changes in a series of red links inside the application to ensure they will get the audience. Unfortunately, it couldn't be done slower or with wider consultation because one change affected other areas and once one was done, application required to do further changes as soon as possible. All stages “in between” would be unstable from the database structure's perspective.

At the moment we are focusing on making sure that there are no more glitches due to these changes. Airport Directory problem has been fixed and there should be no more major problems with it. We will shortly add possibility to add handling agent by you without asking us for this. We just need about 3 weeks for this to be completed. Our new Airport Directory is ready to accept custom handlers, we just didn't manage to make the user input for it yet. For the time being, please send your request about adding handler to support@leonsoftware.com

3.14 release of Leon has been the biggest release in Leon history. This was also the reason why we had to introduce so many 'live' changes. We have introduced completly new Airport Directory, new Handling Request features and much improvements to the OPS side of the new interface plus what is VERY important and cannot be seen - we have prepared database structure for further application growth and speed improvement (this is now our big concern - we want to make Leon faster for users).

At the very beginning of Leon, we were relying on the data structure which we called 'operation'. Operation is always series of legs but it is clearly visible that it means different things to different departments. For Sales - operation is a trip - series of legs sold to a particular customer (sometimes you call it job, sale, deal, etc.). For OPS operation is a series of legs performed on one aircraft in a single day. For maintenance operation counts as all legs between aircraft is released from home base and is back. So far our operation was the 'OPS' version of all of those mentioned above. This caused many problems with the interaction between Sales and OPS. I know that many of you got used to split/merge operations and got proficient in omitting this problem but the main problem is that later on, all other departments - Accounting, Cost Control, etc. have problem to reference to the same data. This was also the main reason why our Sales module is far from being perfect. We are aware that Sales module is now the key - soon all our hands will be on this module and since we have introduced these changes, it will be possible.

We have made this 'operation' error many years ago because at the very beginning Leon was mainly an OPS tool - we looked from OPS perspective. But more and more customers stared to use Leon and Sales departments were pushing us to do major improvement there and we wanted to fulfill these requirements.

All starts in Sales. Sales is the department which creates quotes and then adds trips to the scheduling software. For this reason, trip must be always related to the sales unit, so we have

SWITCHED OPERATION TO TRIP WHICH IS NOW FROM SALES PERSPECTIVE, NOT OPS.

This of course created many problems we had to address and we have addressed all of them over the recent month. Many areas in the application were based on the OPS operation philosophy so we had to change:

ALL ACTIVITIES BEING NOT CONFIRMED WILL BE THE SAME COLOR BUT WITH STRIPES.

Please see the example below: 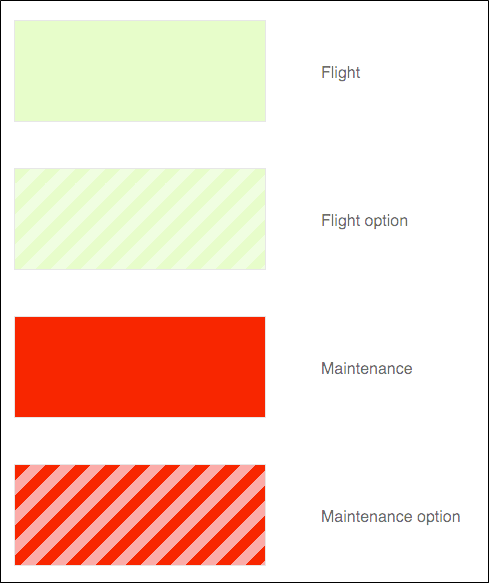 Before we implement this change, I would like to know your feedback. Please direct it to my email: pczubilinski@leonsoftware.com with the email subject 'colours'. If the idea is accepted, we would introduce the same rule for reservations.

I am sure all this changes will soon prove its usefulness. Thank you for your patience, understanding and support.