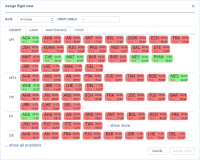 To assign crew to a flight you need to:

Before you assign Crew, Leon will indicate:

- crew already assigned to this flight

- crew assigned to OFF duty. this crew will show at the end of the list of available crew in 'ASSIGN CREW' window

- crew not available - already assigned to another flight in the same period of time. this crew will show at the end of the list in 'ASSIGN CREW' window

If there is a large number of crew within one tab, Leon will display '…show more' option that allows uploading the remaining crewmembers.

Leon remembers the last tab that was opened upon following reopening it, even on a different flight. If the last tab opened was 'OTHER', Leon will revert to the previous tab, either 'COCKPIT' or 'CABIN', that was used before the tab 'OTHER'

When assigning crew to the flights, Leon recalculates the FTL's.

Leon also will suggest FTL calculations by highlighting the crew tile with the following colours:

- rest before the flight violation, not enough rest to perform this flight or series of flights

- FDP violation on the flight or Crew Currency expired

Double-click on a flight will display Crew assigned to this particular sector along with the phone number & email address.

The colour-code in the flights-part of the Crew Panel are as follow:

- flight fully assigned (based on the minimum required Cabin and Cockpit crew indicated in the 'Fleet' section, tab 'CREW')

IMPORTANT!! If the flight is FERRY Leon doesn't check the minimum cabin crew in the overall crew setup. This means that it is sufficient to assign a minimum number of cockpit crew on a FERRY flight in order for this flight to turn green

It is also possible to assign Crew to Option flights. The colour-coding is a per below:

Leon will now display 2 types of warnings in the assign crew pop-up window:

You can also change the crew on a flight or a number of flights. To do so, you need to follow the steps from assigning crew section.

If a duty is not included in the FTL calculations (checkbox 'AOC' not ticked in 'Crew Duties Setup') Leon will not include such a duty in discontinuity calculations.

- this can be activated by going to the SHOW section under the 3-dot icon in the top right corner of the page.

Copying crew between the flights

In order to copy crew to more than one sector it is necessary to hold Shift or Ctrl key while selecting the sectors to which the crew should be copied.

Once this is done the Assign flight crew pop-up window will appear with the entire crew already selected. At this point it is possible to deselect some of the crew members.

Replacing crew on the flights

CREW TIMELINE panel has now a new functionality: REPLACE CREW - it can be used for smooth & quick replacing assigned crew with the other crew members.

To replace crew, mark a flight (or flights) and right-click with the mouse, then select 'REPLACE CREW' option. 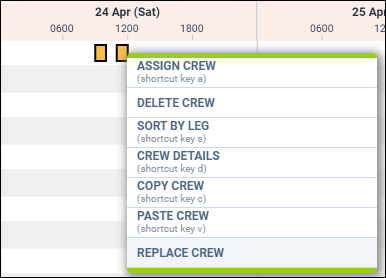 Leon will show a pop-up screen with names & codes of assigned crew - click on a field next to it (showing 'No change') and a drop-down list of available crew will show. Leon shows only crew with ratings for the aircraft assigned to the selected flight. 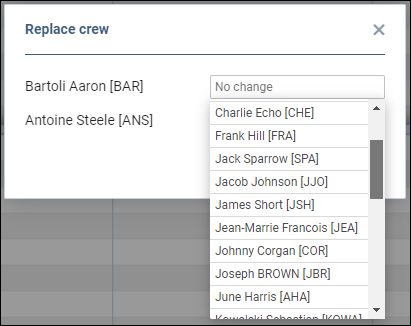 Select crew and click 'SAVE' - a confirmation of replacing crew will show in top-right corner of the page.

Deleting the crew from flights

Deleting Crew from a flight

It is possible to delete the crew from the flights section or the crew section of the Crew Panel.

To delete crew you need to: