We have introduced following additions: 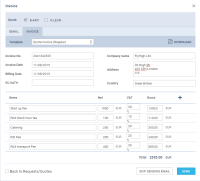 Sending the invoice from Leon

Leon allows sending invoices to clients from the REQUESTS/QUOTES panel.

Before using this option you need to configure EMAIL TEMPLATES for the invoice. You can define as many email templates for Invoice as necessary. Once it's all set up edit the Quote, click a button INVOICE and Leon will show a pop-up window with auto-populated data from Email Templates, according to the template selected in this window (see below).

Leon does not create an invoice itself - you need to manually attach the document. In the future, we will add a possibility to generate an invoice straight from Leon.

UK Air Passenger Duty Tax (UK APD) applies to trips departing from the UK or Northern Ireland and is based on below criteria:

All the rates and allowances of the UK APD can be found here.

The calculations are performed for the whole trip.

The rates vary depending on whether the trip starts in the UK or Northern Ireland and the airport of destination.

The trips starting in the Scottish Highlands and Island are excluded from UK APD.

There are 2 destination bands:

Additionally, the calculation of UK APD for the trips starting at Northern Ireland take into consideration whether the flight is 'direct' or 'indirect'.

The countries falling into each 'Destination band' are listed here

There are 3 rates of duty for each destination band depending on the class of travel:

Duty is charged on each passenger at the rate for the place where their journey ends (their final destination).

The trip consists of 3 flights starts in EGGW and finishes in KJFK.

The trip starts with 3PAX and finishes with 2 PAX on the last flight.

The trip consists of 3 flights starts in EGAA and finishes in KJFK.

The trip starts with 2PAX and finishes with 2 PAX on the last 2 flights.