Assigning Crew to flights is done in a few quick steps. First of all, in Duties Setup, duties on aircraft need to be configured, just like in the old Crew Duties page. If this is done and the flights have been added to the schedule, when adding duties on a particular aircraft registration, a pop - up window will appear with duty info on the left and list of available flights on the right. In this window it is possible to select more than one crew member to be assigned to the flights with corresponding crew positions as per crew ratings assigned in Crew Profile page.

is marked, Leon will automatically send email notifications to crew, which includes the 'Work Schedule' pdf attached. The email template for roster changes notifications is the same as the one for 'Crew Timeline' and can be adjusted in Settings > Email Templates panel.

If flights have already been added (without crew assigned), Leon will show those flights and it will be possible to assigned pilots on selected positions.

In order to do that, first, you need to define duties on the aircraft in the section Settings > Duties Setup, which has been described in THIS MANUAL CHAPTER.

Once duties on the aircraft have been set up, in Crew Calendar, right-click on a selected day/days and choose the duty on particular aircraft (usually such duties are defined as D - Aircraft registration, i.e. D-ABCDE).

The new window which shows is divided into 2 sections (see screenshot on the right):

Once the duties have been added, you might need to publish changes, unless in 'General Settings' it is defined that all added duties should be auto-published.

All added duties 'D' will show in Crew Calendar with the aircraft icon.

In the panel OPS, assigned crew will show on previously selected positions. 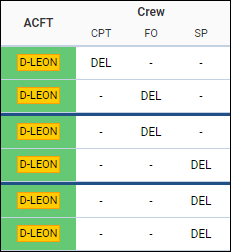 It is possible to create drafts and publish them. More information about the process is available here.

New way of defining and assigning duty on aircraft 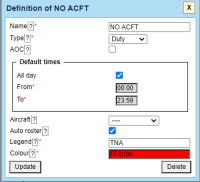 On the Duties Setup page, it is now possible to define duty on aircraft without assigning any particular aircraft tail to the duty.

This type of duty works similar to those defined on a particular aircraft tail, however, it is especially useful for operators with the bigger fleet as it saves creating many duties on each aircraft tail separately. For the crew to get assigned to the flight automatically Auto Roster needs to be selected when defining the duty. Auto Roster feature is available only for the aircraft crew positions, which are set as default for the aicraft type used.

Once the duty is defined, in the Crew Calendar view, adding such duty will open up the Add duties pop-up window.

In a case where Aircraft grouping is selected, the aircraft tail will be filled in by default based on the group from which it got selected.

In a case where Position Type grouping is selected Aircraft field will be empty and it will be possible to manually select Aircraft tail based on the crew that has been selected and his/her ratings.

It is now possible to auto-roster crew by the position type.

In a new column 'Position type' select appropriate position from the list: 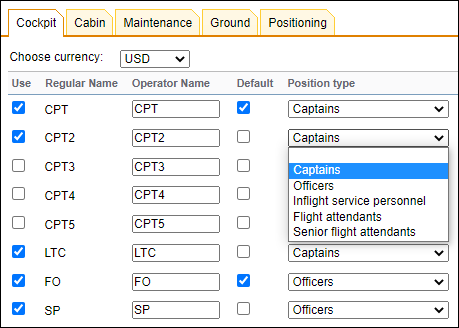 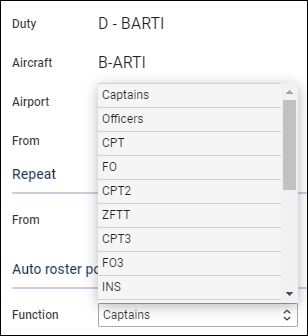 It is still possible to select a particular crew position, such as CPT or FO and it will work as before this functionality.

The example below shows how this works if 3 pilots are assigned, when the position type 'Captains' is selected. 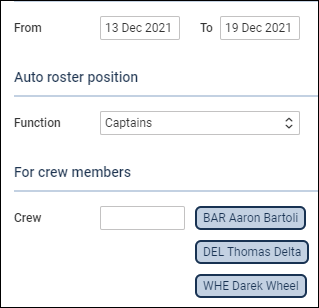 When a flight is added in the time-range selected (13-19 DEC), all 3 pilots are assigned to the flight automatically. 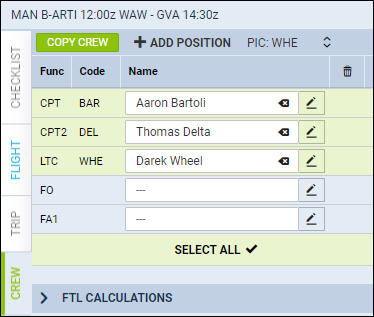