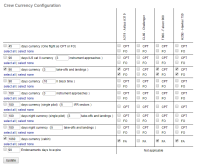 You can check the number of currency days left to expire by hovering the mouse over the status-dot right next to the crew name in a section Crew > Duties.

To turn the feature on go to Settings > Crew Currency and mark appropriate checkboxes. You can change number of days and number of take offs/landings manually as well as insert number of block hours - to adjust this functionality to your needs. Endorsements days to expire can also be marked here.

Crew currency feature will work properly only when Journey Logs are being added to Leon and the field 'Pilot Flying' has been filled in with pilot/pilots codes. In case where FO did take off and CPT did landing (or vice versa), you should add crew codes in a field 'Pilot Flying' as FO/CPT or CPT/FO 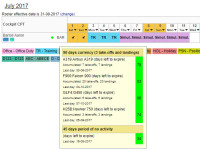 In a section Crew > Duties in the filter, mark a checkbox Show dot - Leon will show the number of days left to expire for a particular currency if you hover the mouse over the status-dot next to the crew name.

If you have SIM duties defined by yourself in a section Duties Setup then Leon will calculate it as: 1 SIM duty = 1 landing. If you add 'Simulator' duty from the bottom of the duties list - it will show in a section OPS and you will be able to specify how many landing a pilot has done during 1 SIM session.

The crew currency records are also displayed on the crew tooltips in a section OPS (Table view). You can also check a report Crew Currency for a better view on who's currency expires and when.

Leon DOES NOT calculate crew currency for Freelancers crew (if a checkbox 'Freelancer' is marked in crew full profile)
leon/crew-currency.txt · Last modified: 2020/05/06 10:19 by bartek