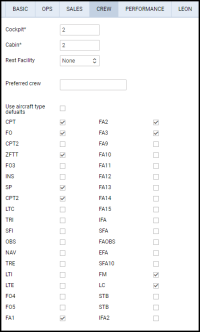 It is now possible to set up default crew positions not only for aircraft type but also for particular aircraft tail.

This can be set up in the aircraft edition panel, under the tab 'CREW'.

In this tab, a list of positions specified in the section 'Aircraft Crew Positions' is visible.

This list can get further narrowed down for a particular aircraft registration. This is especially useful for operators with many same-type aircraft in their fleet but different requirements as to the necessary crew positions on each tail.

To apply the default positions, 'Use aircraft type defaults' checkbox needs to be unmarked. If the checkbox is marked, crew positions as specified in Aircraft Crew Positions will apply.