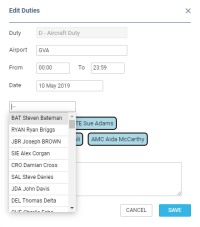 1. When assigning crew, in the Assign Flight Crew pop-up it is now possible to select All Bases. Generally, the crew listed in the pop-up are the ones available in the base and the default base will reflect the airport of departure of the particular flight to which we are trying to assign the crew. The order of bases displayed is by number of crew with a particular base assigned.

If there are no crew based in that airport All Bases will appear, which means that all crew available for assigning from all bases will be listed.

2. Another option which has been developed is the one to edit duties. It is now possible to edit the airport, time, and date of the existing duty. It is also possible to add/delete crew members to the duty.